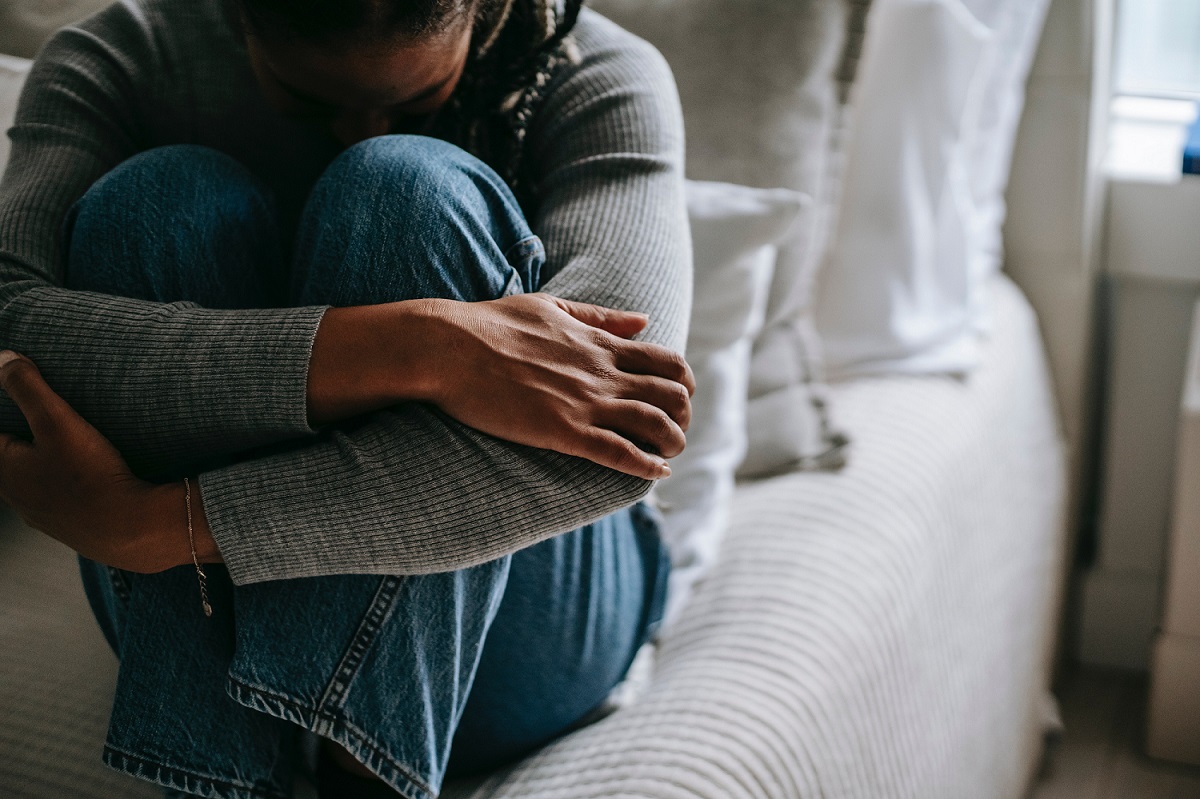 They are a threat to human health. In some european countries, 11% of the population risks a premature death because of them. How can insurers, healthcare providers and companies come together against noncommunicable diseases?

Noncommunicable disease - a broad definition including cardiovascular problems, cancer, respiratory diseases or diabetes - is the leading cause of death worldwide. High blood pressure, elevated blood sugar, cholesterol and excess weight are the main risk factors, and they all have one thing in common – they are largely dependent upon human behaviour. A sedentary lifestyle, alcohol consumption, excessive salt intake and smoking, among other factors, increase the probability of being one of those who, every 2 seconds, falls victim to non-communicable diseases.

The increased exposure to these risk factors has been responsible for the rapid growth of noncommunicable diseases - so rapid, in fact, it has been deemed a Pandemic in its own right. Health systems are faced with epidemiological scenarios characterized by an aging population and the burden of chronic non-communicable diseases. Recent estimates predict that these diseases will soon be responsible for over 60% of all deaths – an update on a forecast dating back to just 2020. The galloping pace at which these diseases are spreading compounds on another alarming fact: the growing number of cases among young people. 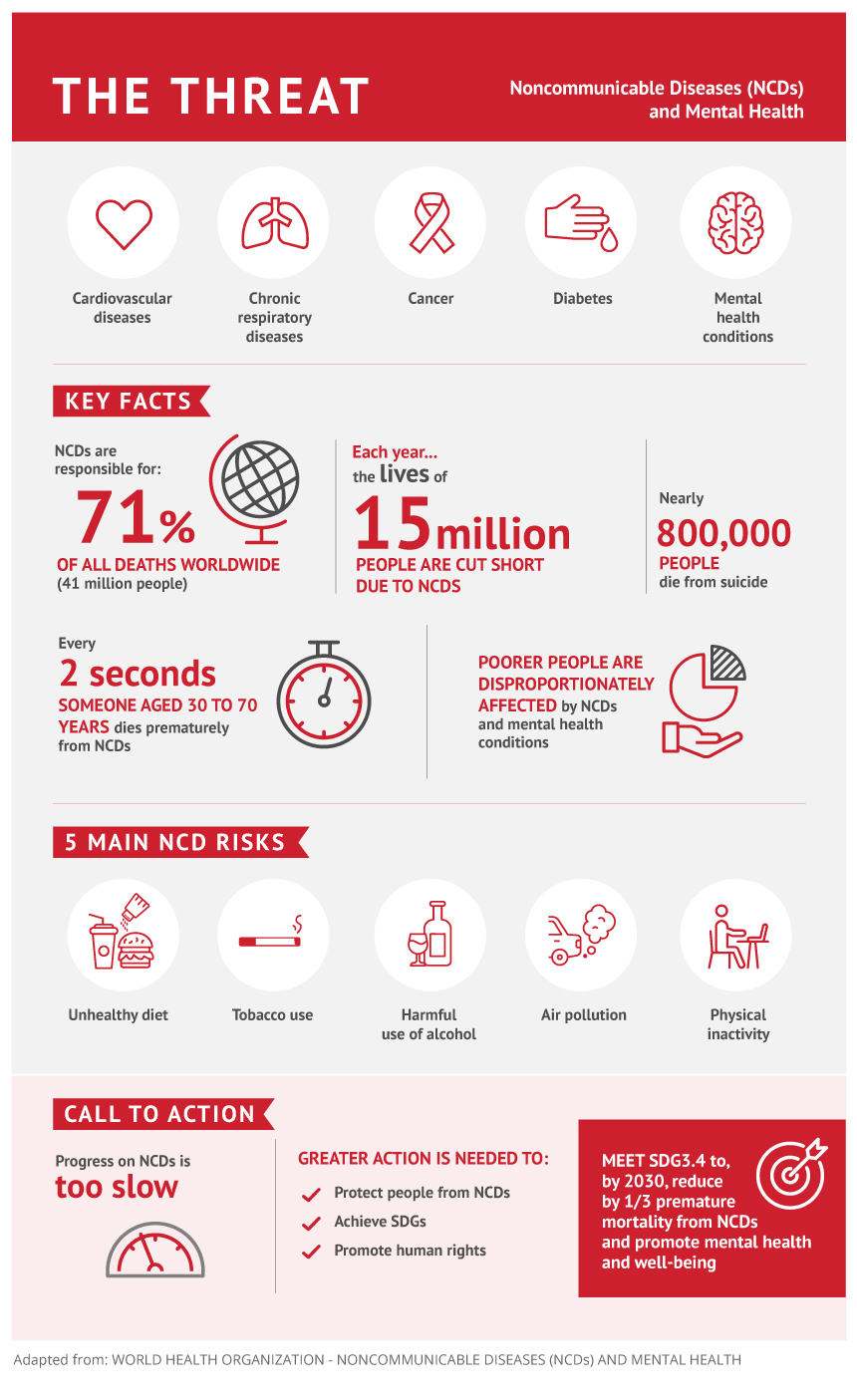 Noncommunicable diseases kill more than 40 million people a year, with 15 million aged between 30 and 70 years old. The majority (80%) of these cases of “premature” death occur in countries with low to medium income, such as Portugal. Reducing the incidence of these diseases is essential and public and health policy efforts play a big part in tackling the problem. Nonetheless, each person has a role to play: the responsibility falls on all of us - from citizens to institutions and organizations - each of us can take part.

Which non-communicable diseases have the greatest impact?

Cardiovascular diseases, heightened by several risk factors such as inadequate nutrition, physical inactivity, tobacco and alcohol consumption, high blood pressure or diabetes, are the single highest cause of deaths within non-communicable diseases:17.7 million victims per year. Next on this grim list are neoplasms, responsible for 8.8 million deaths per year, followed by respiratory diseases (3.9 million) and diabetes (1.6 million per year).

Prevention and control of non-communicable diseases

No one is truly immune to non-communicable diseases, and prevention usually means addressing the underlying risk factors: after all, 6 out of 10 people are overweight and 1 in 10 have diabetes. Each person's individual risk also depends on their genetic heritage, but most of these diseases can be prevented or delayed through preventive and control measures to reduce cardiovascular risk, cancer, diabetes and chronic respiratory diseases. Prevention requires a change of habits, which can be difficult to achieve without adequate support systems. Changing the paradigm requires health measures and policies to be in place at a governmental level, as well as support programs for change and behaviour management, at the individual level.
In 2017, at the 70th Global Health Assembly, the United Nations and its member states met with the World Health Organization (WHO) to decide the best course of action. But which measures were agreed upon and what has been done since?

Portugal's stance in the fight against non-communicable diseases

The World Health Organization (WHO) has been monitoring each countries’ progress, based on 10 metrics that reflect the fight against non-communicable diseases. Portugal has committed to a series of protocols, guidelines, and measures to assess the health of its population. The emphasis has been on actions to reduce the consumption of alcohol and tobacco, as well as the practice of unhealthy diets. The reinforcement and implementation of motivational programs to promote physical activity is another indicator that seeks to reduce the risk factors for non-communicable diseases.

According to the WHO, Portugal is well ranked, although not among the best, in applying these measures. Mainly with regard to steps taken to combat the consumption of tobacco and alcohol and to promote a healthier diet:

Evidence points out that those with health insurance are more likely to obtain treatment for noncommunicable diseases and less likely to borrow or sell goods to pay for it. Broad health insurance coverage has been shown to mitigate socioeconomic and regional disparities in access to treatment. As a whole, insurance coverage can serve as an important political tool in promoting the treatment of non-communicable diseases and reducing inequalities.
Personalized solutions covering treatment, as well as prevention, are crucial for their impact on the end customer and as a political and economic partner to “fight” these diseases. By reducing the economic impact and inequalities in access to treatment, insurance coverage allows healthcare providers to deliver more successful and efficient treatments. It also allows for companies to benefit from the (physical and economic) well-being of their employees.

Which business models will work in the future?

A question arises: who will deliver these services and finance treating and preventing noncommunicable diseases? How might Insurers help fight the growth of these diseases, while maintaining viable economies of scale that allow servicing a vast client base?
Several experts suggest that the future of health insurance in countries where the burden of noncommunicable diseases is rising rapidly will depend on:

Over time and as the benefits of health insurance in this area become clearer to customers, it will be imperative that all stakeholders – insurers, companies, and service providers – come together to combat non-communicable diseases at scale and in a scalable fashion. Only then will the benefits come to fruition, both to national healthcare systems and to all the players involved.